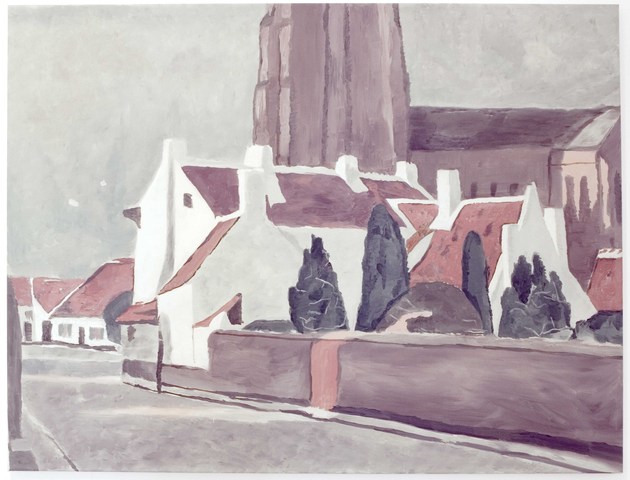 Before us looms a typical Flemish village-scene, seemingly like so many that have already been painted through the ages. If, however, the viewer briefly pauses in front of this polder-village, he might get the feeling that there’s something not quite right. There are no windows, the doors and walls are closed. The peacefulness that such scenes usually convey is missing, with a sense of menace having taken its place. This void has an estranging air, and the uneasy feeling is characterized as ‘das Unheimliche’, unfamiliar, even sinister. Nonetheless, Tuymans’ art works at first sight seem to display the familiar, ‘das Heimliche’, until you become aware of the threat emanating from this deathly silence. As Tuymans himself puts it: ‘Images must – when they wish to achieve an effect – contain a terrible silence within them, a filled silence or void. The viewer must be motionless in front of the image, be numbed.’

Vlaams Dorp (‘Flemish Village’) is part of the Heimat (‘Home’) series from 1995, in which Tuymans depicts not only a very typical Flemish village, but also the Yser Tower and the Flemish Lion, two of the clearest symbols for the idealistic Flemish nationalism. The use of faded colours and the threat, instead of peace, that is formed from the scenery show, however, the transformation of those nationalist symbols in the extreme right-wing ideology. For Tuymans, it are, therefore, merely hollow symbols. Technically, this work also fits Tuymans’ oeuvre: it’s an ‘authentic forgery’, painted by the example of a polaroid, a model, or, in this case, an existing oil painting. That method of working is not a free choice made by the artist, but, according to Tuymans, a necessary evil. After all, aren’t all images used once already? Consequently, the artist is left with nothing else than shame about turning the unwilling copying in a workable construction. But the final goal for Tuymans is not the used medium. It is not a matter of how he depicts something, rather what he depicts: “Not the new medium or the new technique counts. What is very important is the stratification of the meaning.’'